Gridserve has announced that the UK’s first fully electric forecourt in Braintree, Essex is open for business. Providing for up to 36 electric vehicles to be charged simultaneously with high power (up to 350kW) chargers, the development also includes retail outlets and an electric vehicle leasing service.

The Braintree site is the first of over 100 Electric Forecourts that Gridserve plans to build over the next five years. The company says that its £1bn UK-wide programme aims to make EV driving an enjoyable, ultra-convenient and stress-free experience. 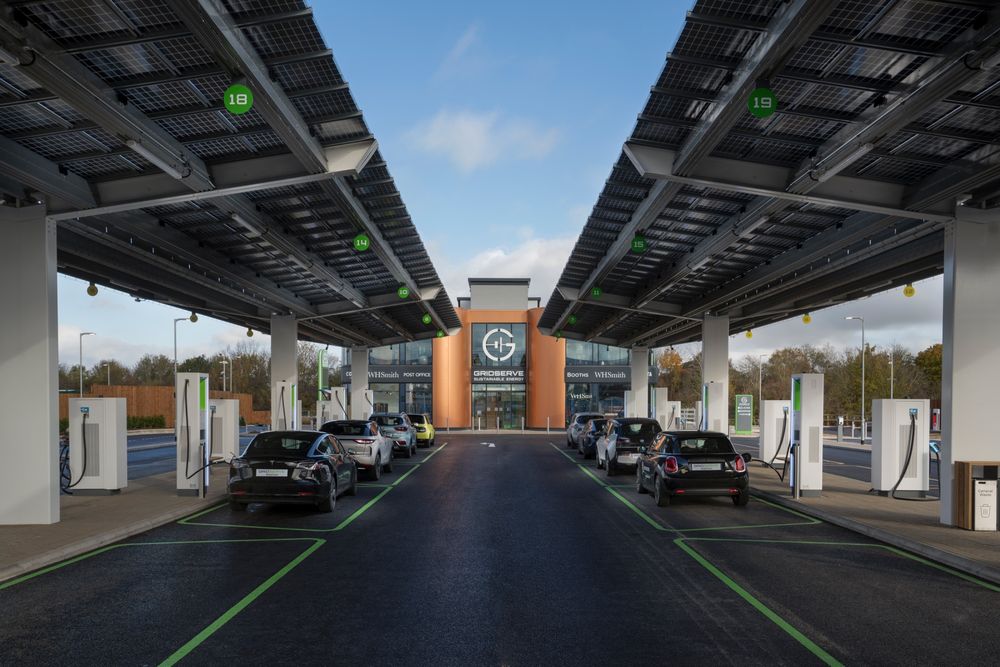 Toddington Harper, Founder and CEO of Gridserve said:“Today’s announcement represents a major milestone in achieving Gridserve’s purpose to deliver sustainable energy and move the needle on climate change. “It’s our collective responsibility to prevent greenhouse gas emissions rising further, and electric vehicles powered by clean energy represent a large part of the solution. However, charging has to be simple and free of anxiety, which is why we’ve designed our Electric Forecourts entirely around the needs of drivers.”

As well as Gridserve, the Braintree project has been funded by Hitachi Capital (UK) PLC, Innovate UK and the Office for Zero Emission Vehicles (OZEV).

The development uses electricity generated from both the solar power canopies above the chargers, and a network of hybrid solar farms, also operated by Gridserve. The UK’s first subsidy-free solar farm in Clay Hill is paired with the project, providing 100% renewable energy via the National Grid.

There is also a 6 MWh battery onsite which helps to balance the local energy grid and shift energy to periods when it is more valuable. For example, on windy winter nights the battery can store enough energy to drive 24,000 miles in electric vehicles the following day, helping to maximise the value of renewable energy resources, stabilise the grid, and keep prices low.

Drivers charging at the Braintree site will initially pay 24p per kWh of energy (including VAT), meaning a typical charge from 20% to 80% costs under £10 for an average-size electric vehicle on the market today. While vehicles charge, there is an accompanying retail space for drivers hosting partners including WHSmith Travel, Costa Coffee, Booths, Post Office, and Gourmade. The facility also includes a waiting lounge, free superfast WiFi, high-end washrooms, a dedicated kid’s area, wellbeing area with exercise bikes that generate electricity, and business meeting room pods.

The Braintree site provides the option for ICE drivers to visit the net zero emissions EV leasing service launched by Gridserve alongside the Electric Forecourt where EVs can be seen and tried out. Gridserve says the service is designed to bring the cost of driving electric well below that of petrol or diesel cars, and minimise the environmental impact of EVs.

The clean energy and electric vehicle channel, Fully Charged, has produced a video (hosted by Robert Llewellyn) about the Gridserve site in Braintree.